Have compassion for everyone you meet, even if they don’t want it. What appears bad manners, an ill temper or cynicism is always a sign of things no ears have heard, no eyes have seen. You do not know what wars are going on down there where the spirit meets the bone. —Miller Williams

One special hike along the Rookery Trail (within the SWA Trail network of Grassy Waters Preserve) brought an unbelievable number of alligator sightings — I lost track at 30 in the space of 2-3 hours. By far the most of any hike! One of the guys we stumbled upon was this handsome fella. 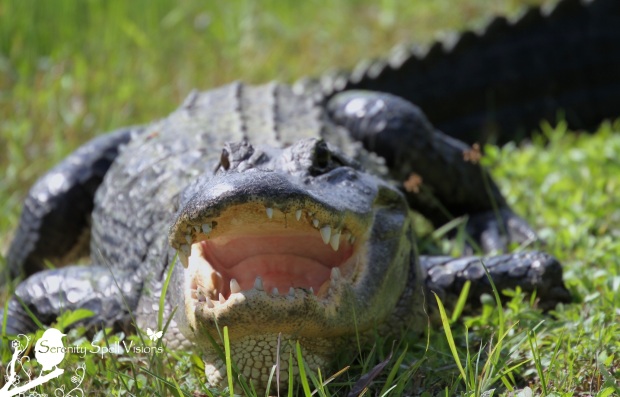 He’s not hissing, or being hostile — far from it, he was as mellow as could be. As with other cold-blooded reptiles, he was basking in the sun, regulating his body temperature. Occasionally alligators will keep their mouths open, akin to a dog panting…. It’s a cooling mechanism.

Cooling down on a warm day

Out of 20-50 eggs that are laid by the mother alligator, only a few will survive to adulthood — usually less than five. Many predators prey upon the juvenile alligators, include snapping turtles, snakes, raccoons, bobcats, raptors, wading birds, and even larger alligators. This guy (or girl?) is a survivor, having encountered a mishap resulting in a missing foot as a hatchling or young adult — the injury appears long, and well-healed. And he/she was doing just fine, enjoying the beautiful land and wetlands of this magnificent preserved Everglades watershed.

Relaxing in my wonderful Everglades