For more information and blog posts on Hypoluxo Scrub, visit the Categories section below, in such articles as A Walk Through an Endangered Scrub Community, Endangered Native Florida Ecosystems at the Hypoluxo Scrub Natural Area, and more. 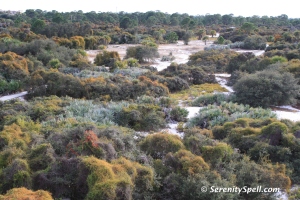 Palm Beach County has managed to preserve several swaths of pristine Florida land, and the Hypoluxo Scrub Natural Area is one such example. This land was never developed, and saw minimal agricultural use throughout the years. Purchased in 1999 in a growing effort to protect and maintain threatened and endangered biological communities in the county, we’re thankful for their efforts, and to be afforded this glimpse of native Florida. Located on a sand ridge that was once an ancient shoreline, 97 acres of Florida scrub and scrubby flatwoods communities have been incorporated and are now protected at the Hypoluxo Scrub Natural Area, as are the threatened Florida scrub-jay and gopher tortoise, both victims of over-development and lack of protection. Scrub and scrubby flatwoods habitats are two of the rarest natural communities in Florida, with less than 2 percent remaining in Palm Beach County.

Entering the trail area from the parking lot are two observation towers; the vantage point overlooking the natural area from the towers allows visitors to view the land as it would have appeared pre-development. Educational plaques around the towers explain the region’s history (as well as that of the Town of Hypoluxo), beginning with the early settlers in 1873 to the 1960s. Standing guard in front of the observation tower is the looming Barefoot Mailman statue, in honor of the 19th-century men who delivered mail on treacherous routes — 3-days each way, and involving nearly 100 miles of unpaved roads and alligator- and shark-infested waters. As the plaques state, the land that is now the Hypoluxo Scrub Natural Area was once owned by Andrew Garnett, James Edward Hamilton, and James Porter; Garnett and Hamilton eventually won contracts to deliver mail from Jupiter to Miami. (Remnants of Porter’s homesite are still visible at the location.) The northernmost portion of the “Sand Road,” built in 1892, signaled the end of the barefoot mailmen and is located within the park (and is the only section of the road that’s actually still sand). An additional sweet smaller sculpture greets visitors to the natural area, one by Chrisanthy Vargo depicting a scrub jay, a fox, bromeliad, and a tortoise — life of the scrub.

The .2-mile paved Cottonweed Nature Trail trail leads from the observation towers, and is lined with gopher tortoise burrows. While there are definitely areas within Hypoluxo Scrub that are shaded, much is exposed to the open sun — so an early morning or late afternoon/early evening hike are usually ideal, at least from our experiences. It’s a beautiful casual venture, and a great opportunity to explore this endangered ecosystem. Our preferred hike is the 1.5-mile natural Eastern Pondhawk Trail loop, which provides a lovely view of pine and scrubby flatwoods. Several other paths loop off the main trail as well, but be aware of crushing any fragile tortoise burrows and delicate and vital scrub plants.

Even on the sandy scrub trail, bright flowers spot the landscape: Cottonweed, Prickly pear, Netted pawpaw, Gopher apple, and Honeycombhead flash all shades of yellows, whites, and reds across the sand. The area is great for birdwatching, although during our last visit the impending rain seemed to quiet the wildlife. However, on a previous walk towards the back of the park, we saw a large flash of tan… Of deer? Or of leaping fox?

Observation Tower from the scrub

Slash pines against the sky 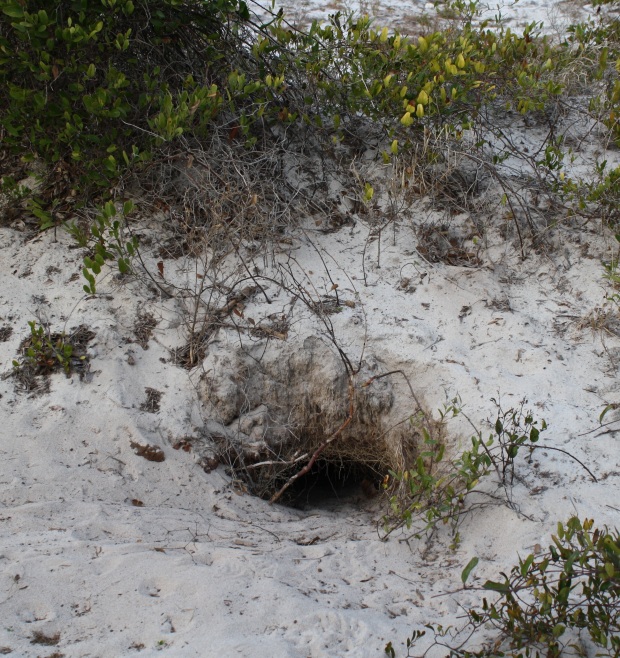