There’s so much color in the depths of South Florida, but this little one’s not native to the area. It’s native to a region where I was raised (roundabout, anyways). When I think of COLOR, my brain always returns to the petite endangered Gouldian Finch — also known as the Rainbow Finch, appropriately.

This spectacularly-colored little bird is native to Australia, where their numbers have decreased dramatically throughout the 20th century due to habitat loss. They remain an endangered species in their natural habitat, with less than 2,500 remaining. While attempts at their reintroduction have proved unsuccessful, thankfully these lovely finches are the subject of a conservation program in Australia. There are currently plans to recover and conserve their natural habitats, with management guidelines in place to educate landholders about land management, promoting the recovery program, and Gouldian Finch conservation. They’re also popular birds in captivity and among breeders, which keeps their general populations higher.

Gouldian (Rainbow) Finch posing at his sanctuary in Butterfly World

In 1992, the species was classified as endangered in the wild. That same year, Catwoman stuffed a poor Gouldian into her mouth in Batman Returns — some say, to raise awareness for their plight.

Here’s to wishing all the best for this beautiful and bright little bird!

It doesn’t take much to find love on an excursion into the natural world — which is why I escape to its beauty as much as humanly possible. 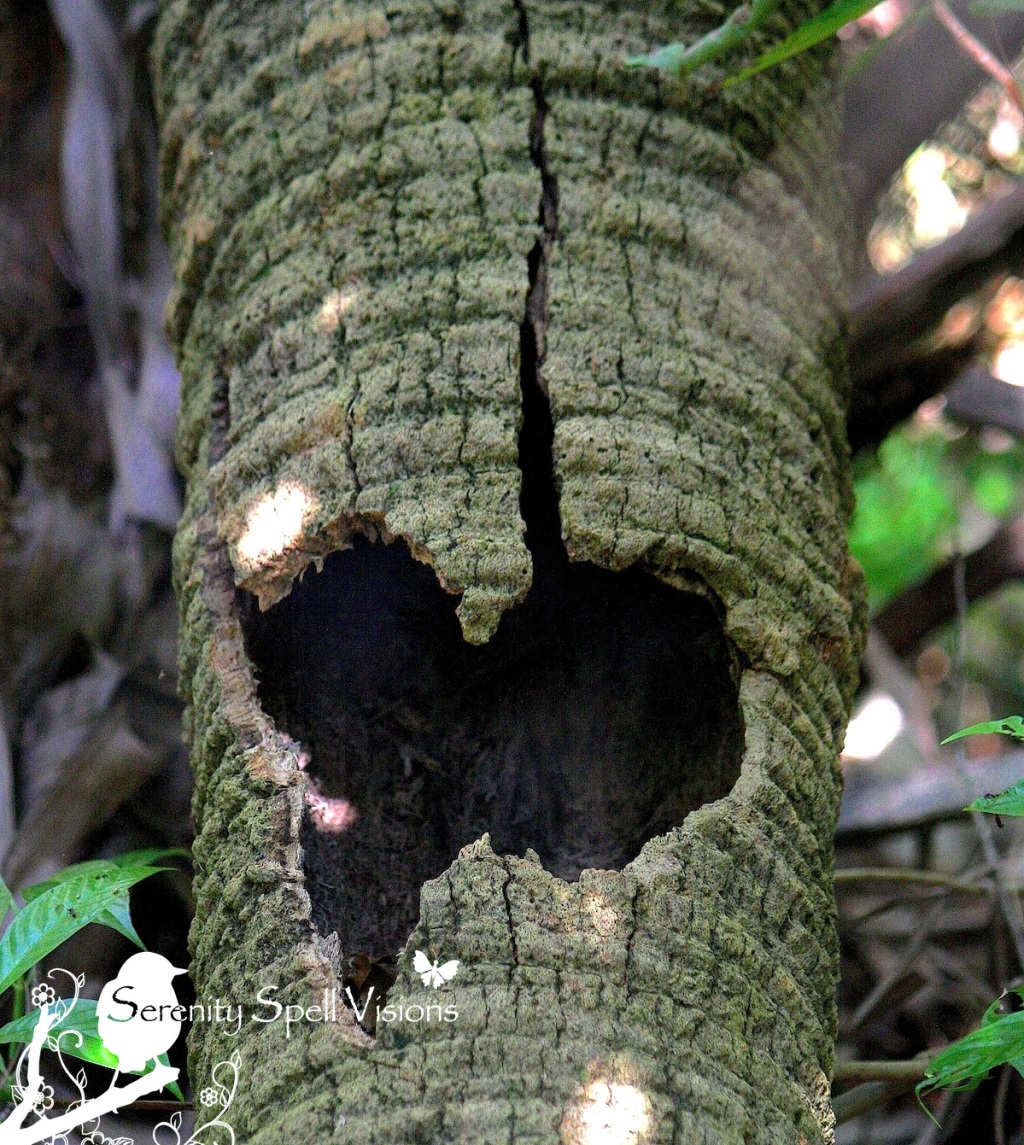 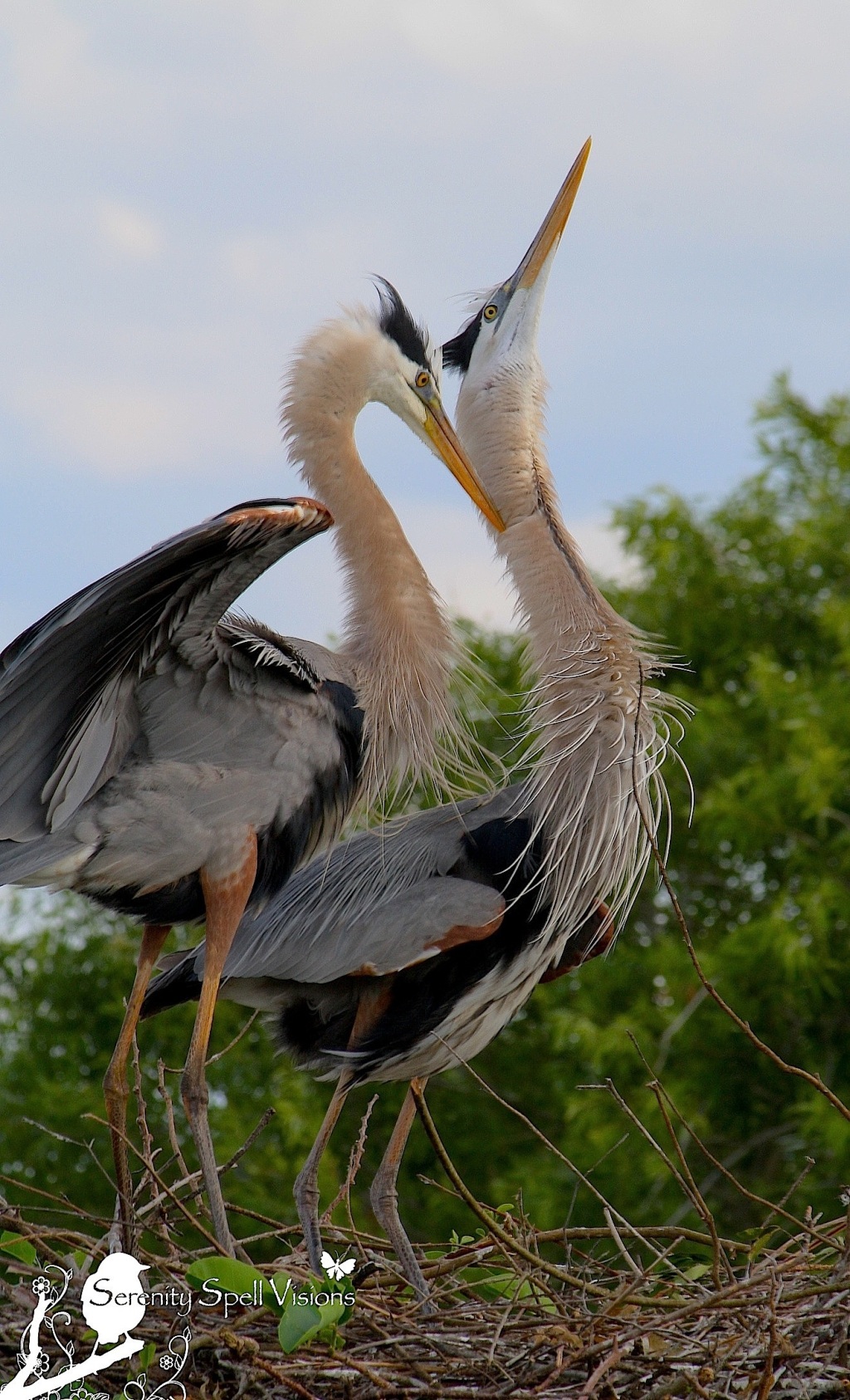 We’re approaching breeding season for our gators (these were scenes of last year’s cuddles — a very recent mom and dad). Interestingly, recent studies have shown that up to 70 percent of alligator females remained with their partner — often for many years.

Breeding begins in the spring (mid-April through May), and you can hear their loud bellows throughout the swamps — calls used to attract mates and to warn off other males. While (like all wildlife) gators don’t want to bother humans, the mating season isn’t the time to push your luck — aggression is at a higher level, and they may become more territorial. It’s always wise to be aware of the season. Alligator courtship is complex — vocalizations, head-slapping on the water’s surface, body posturing, snout and back rubbing, bubble blowing, and pheromone (scent) signals all play into the process.

Alligator Love in the Florida Wetlands 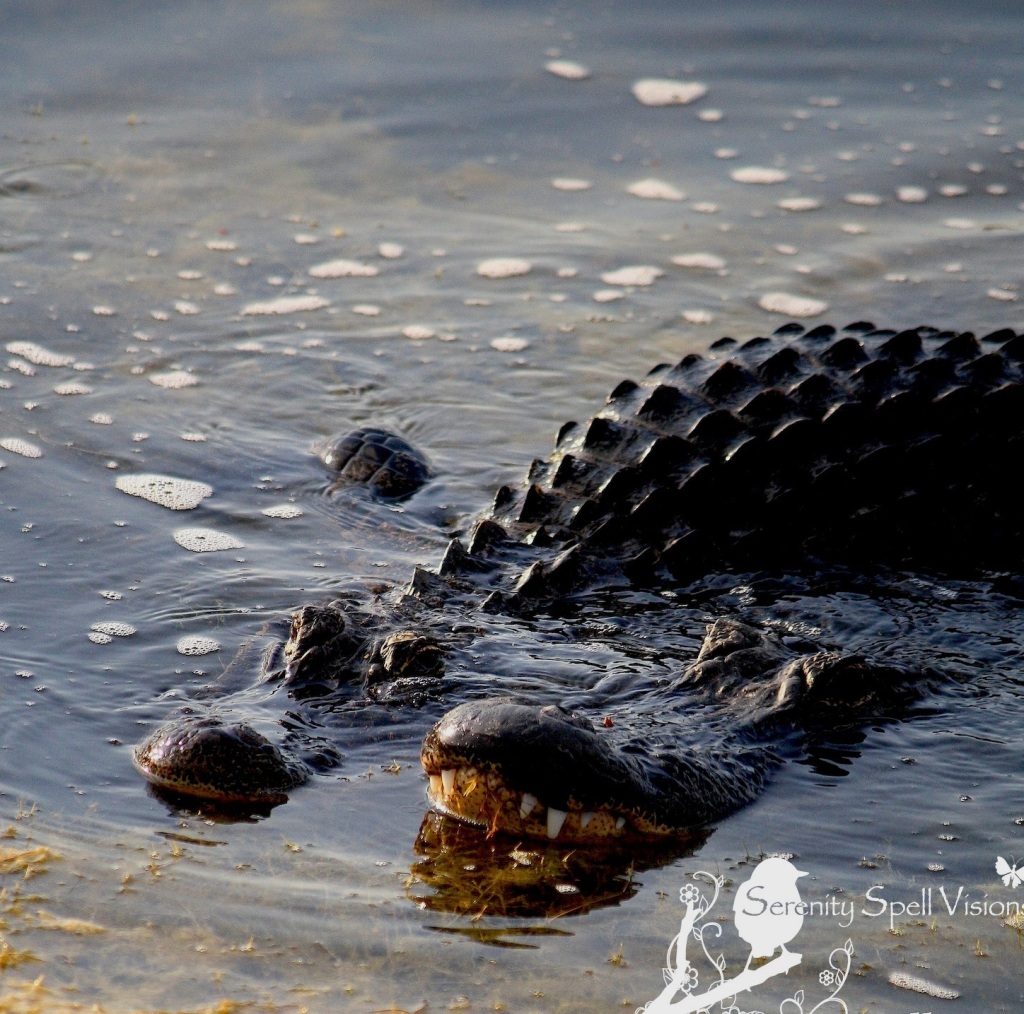 Well, this was my initial DELICATE post — a precious periwinkle dragonfly resting along the Apoxee Trail in the Grassy Waters Preserve.  It was my companion for the better part of a half-mile; this gossamer creation following me as I hiked — perhaps because I was head-to-toe in periwinkle!

That is, until Sunday evening, when a starving black kitten crossed my path. I’ve been TNRing (Trap-Neuter-Release) many kitties, in my wee attempt to help control the populations. (Our county has a severe feline overpopulation issue.) Apparently a lovely woman nearby is doing the same (THANK YOU, stranger!). Sometimes, it’s not cheap: If the kitties are sick, pregnant, need medications, or if assistance is needed with trapping (they can be wily)…it quickly adds up. But these guys need help. Many have been abandoned, the sad products of foreclosed homes and other circumstances. I’ve seen pets left behind for a simple move / long vacation, shockingly.

My guys are rescues…. And it’s easy to see which ones can survive out there, and which ones cannot. This girl falls into the latter category. She tried desperately to find a home for as long as she was alive, apparently. Maya (?!? still playing with her name) crossed my path in another section of the neighborhood, and, according to one of the tenants, she has no litter mates, and was unable to reach the food provided by the woman caring for the other strays (being so tiny and timid). She had been trying to sneak into the homes of many residents — to no avail. An absolute sweetheart, one of the friendliest felines I’ve ever seen, she wants nothing more than love, safety, and shelter. But every bone in her body is razor-sharp: each vertebrae, her hips…. She was starving. At 6 months old, she has the body of a 4-month-old. I’ll never understand how a starving animal could be repeatedly turned away by so many, nor do I want to understand.

Enjoying the view from inside

Right now, while her body’s very delicate, she’s a survivor — like so many souls on the streets, she’s a combination of delicacy and strength. And despite what she’s seen, despite her physical hardships and emaciation, despite her continued unsuccessful attempts at finding a home (until now), she remains the sweetest little soul.

One of the birds I most enjoy watching in our wetlands and swamps is the Great Egret. It’s hard not to be captivated by these creatures — the epitome of ethereal beauty, grace and strength, they wade, stalk and fly in our waters with balletic poise. They’re the largest egret in the Old World — thus the great of their title. In the New World however, Great Blue Herons win the size competition.

To see their brilliant all-white plumage reflected on the water’s surface is always a stunning sight. These beautiful birds were hunted mercilessly towards the end of the 19th century for their gorgeous feathers — nearly to the point of extinction, their numbers decimated by 95 percent. Their breeding plumage was especially prized, and the treasured feathers were used in hats across the globe. During the breeding season, the Great Egret displays long, elegant plumes on its back, which are used in courtship displays. But with conservation measures enacted, their numbers grew throughout the 20th century. While wetland habitat loss is once again threatening their existence, these birds have a high adaptability to human habitation. Of course, the loss of wetland ecosystems remains another issue altogether for other wildlife and flora….

These egrets feed by stalking, wading in the shallow water, patiently waiting for fish — then grabbing or stabbing their hapless meal with sharp bills. I’ve also seen them dine on amphibians, reptiles, and small mammals; sometimes their eyes are larger than their stomachs. 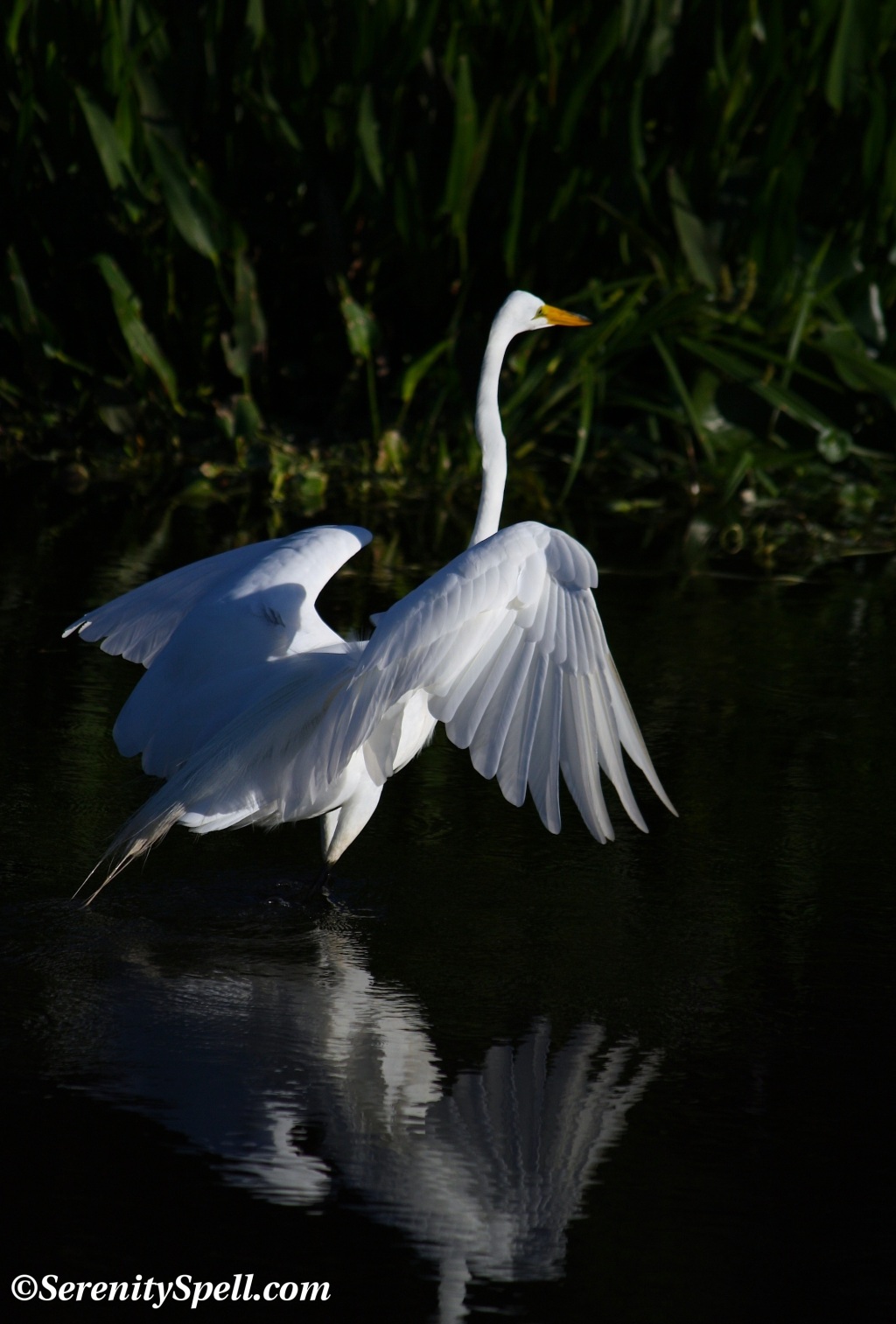 Patiently stalking a meal among the purple stalks of the aquatic plant, pickerelweed 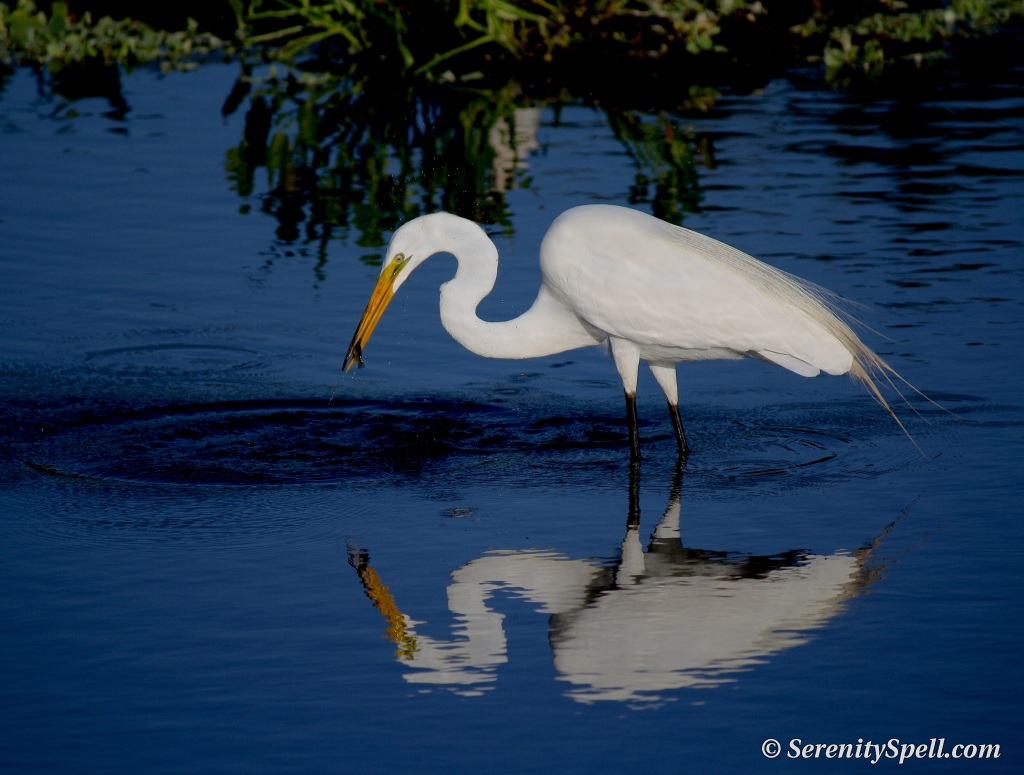 Snagging a meal in the wetlands

Southeast Florida, and the Everglades, boasts its share of green… Without further ado, here’s a sampling of our local wildlife sporting some brilliant green hues!

The brilliant green lore of a breeding Great Egret

A hiding frog in the wetlands’ duckweed 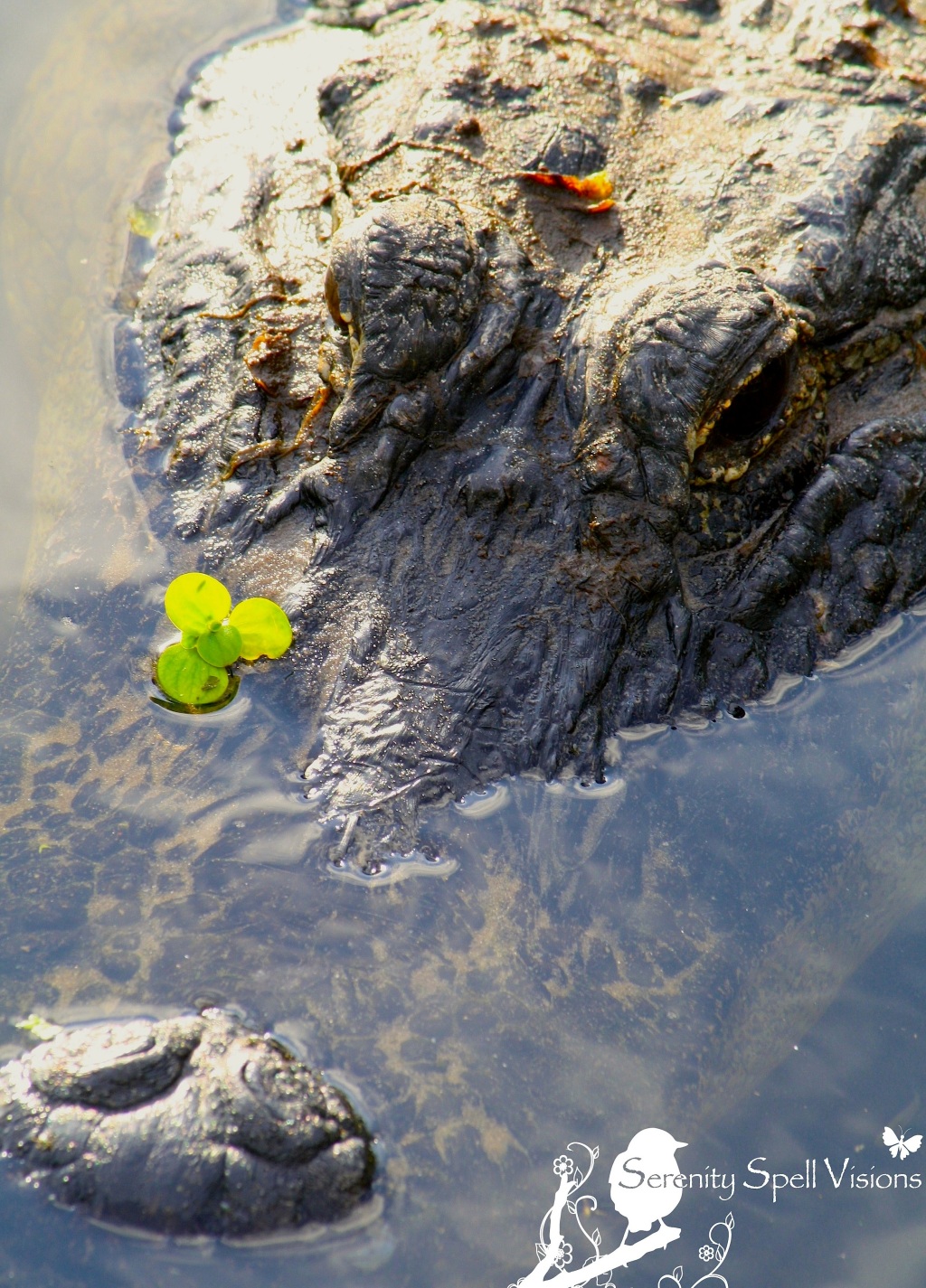 Duckweed bloom on a stalking alligator 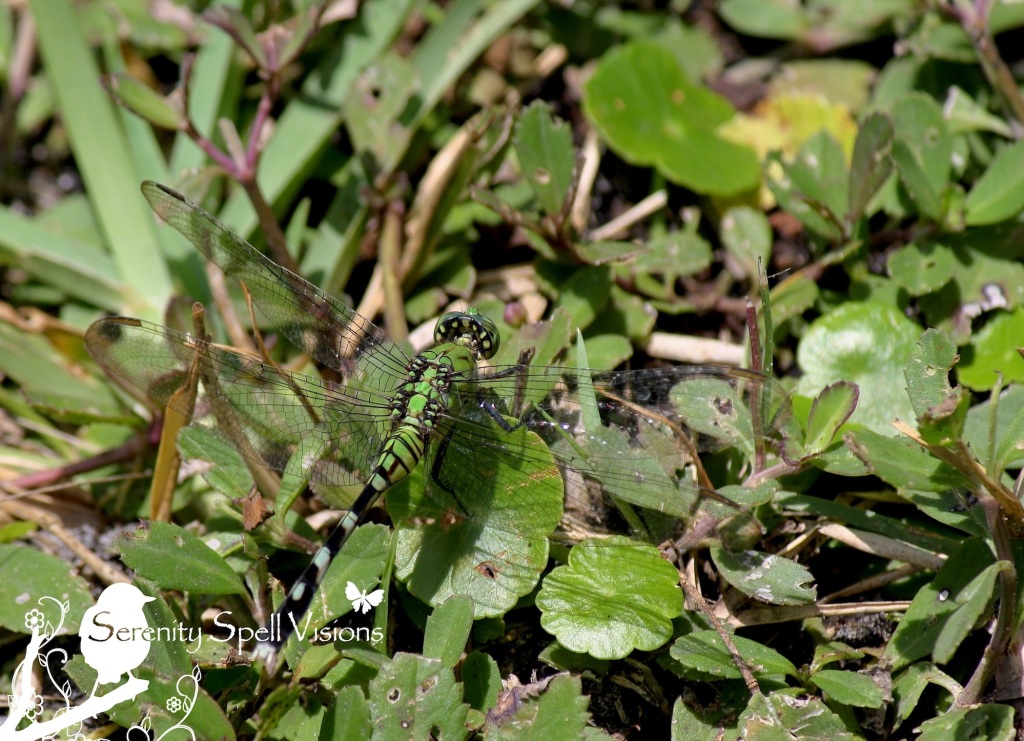 Green dragonfly along the Apoxee Trail in the Grassy Waters Preserve

A non-native Knight Anole…in the backyard!

Duckweed vista of the wetlands 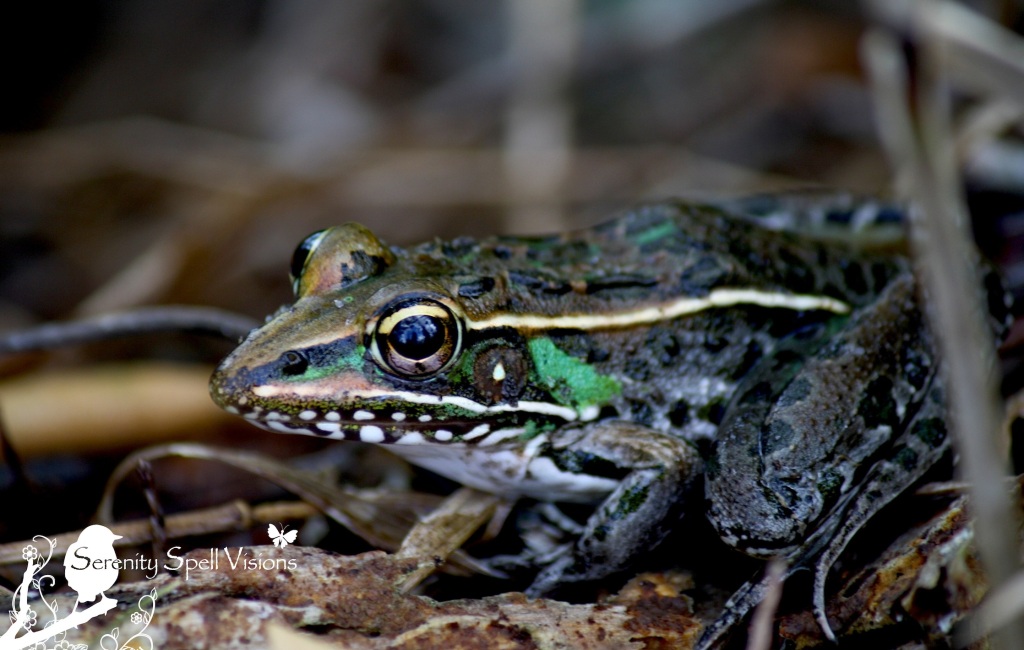 A lovely luminescent Cricket Frog in the Grassy Waters Preserve