Our Snakes Swim! And: Learn How to Spot a Non-Venomous Water Snake

The love for all living creatures is the most noble attribute of man. ―Charles Darwin

We have lots of snakes in South Florida, in the Everglades region — and like other parts of the country, most are non-venomous, with a few poisonous critters thrown in for good measure. The Cottonmouth, Rattlesnake, and Coral Snake are Florida’s more notable poisonous snakes — but there are only 6 species that are venomous and a known danger to humans. SIX! The remaining are non-venomous, and vital members of our ecosystem.

But if you’ve seen the Discovery Channel of late — or the History Channel’s “Life After People” series — you’ll know of the Everglades’ relatively new and constant battle with pythons. In fact, just recently on August 15, the biggest python was captured in the Everglades National Park — a female measuring 17 feet, 7 inches, and carrying 87 eggs. WHOA. Wrap your head around that size (and egg quantity) for a moment. While she broke records, these invasive pythons continue to wreak havoc on native Everglades wildlife; these snakes that were brought to Florida as a result of the relaxed regulations in the trade of exotic reptiles are decimating the local populations of a sensitive and threatened ecosystem onto which they were set free.

But fortunately, I didn’t see her; I saw water snakes during our last venture! This guy is a common water snake in our area — the Florida Banded Water Snake. They prefer freshwater habitats, and can be found in the shallow waters of wetlands, swamps, marshes, ponds, lakes, streams, and rivers. They’re native to the peninsula, and to the extremities of southeastern Georgia, and feed on live and dead fish and amphibians. Like other snakes, the Banded Water Snake plays a vital and significant role in our ecosystem. As predators, they feed on a variety of creatures, and can control the rodent populations. Snakes are also important prey for other species of predators. The presence or removal of snakes from any area affects the overall health of many ecosystems — and continued development threatens snakes’ survival.

I see a swimming ssssnake!

Many people automatically assume water snakes are venomous — this is actually far from the truth. Most, nearly all in fact, are harmless and non-venomous to humans — although like any wildlife, they have a mouth full of teeth, and will bite to defend themselves. Sadly, many of these perfectly harmless snakes are killed by ignorant humans — so to avoid any confusion, here’s an easy way to distinguish non-venomous water snakes from the Cottonmouths: 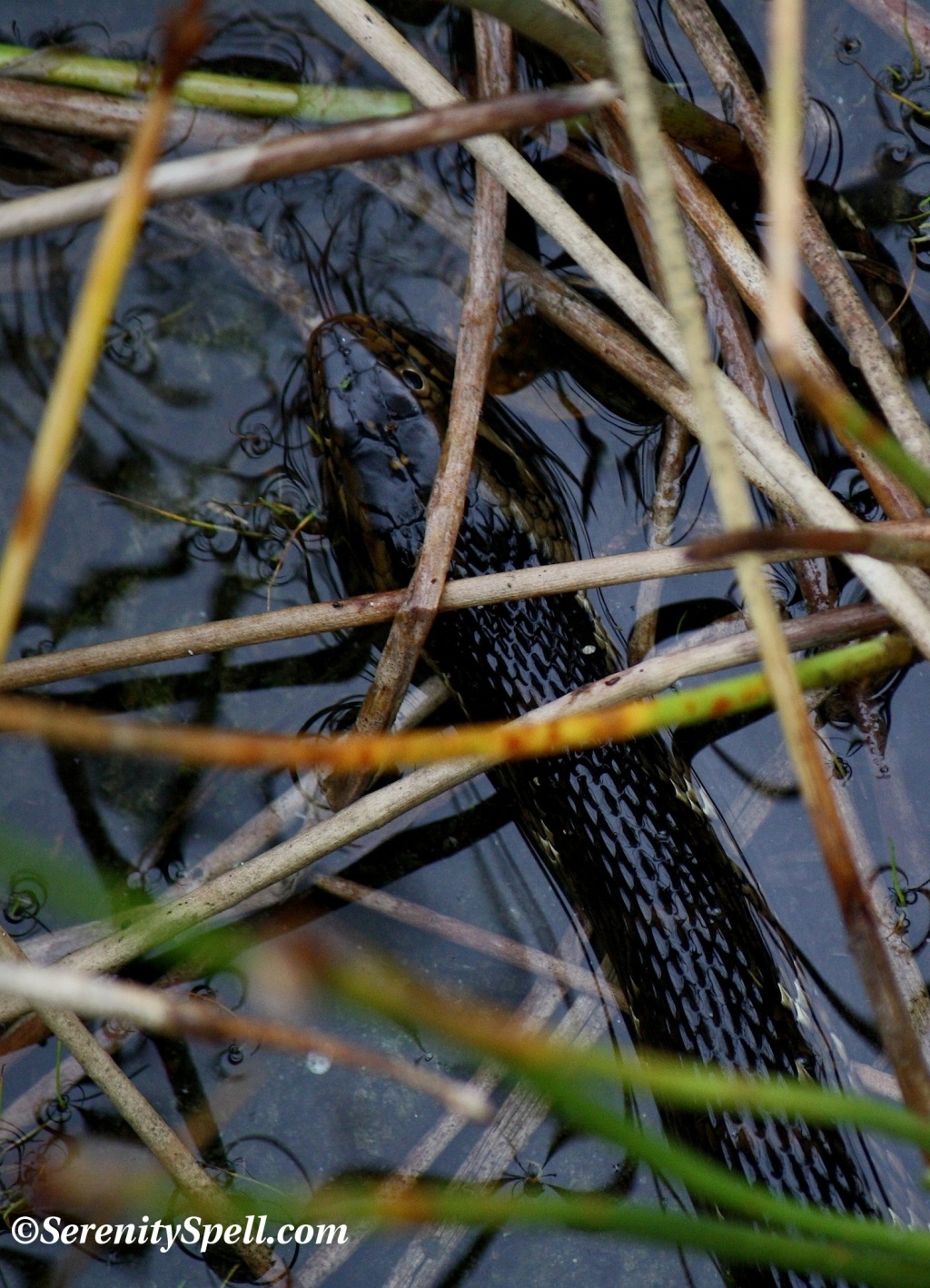 Feeling my way around; Look at my eyes…

We often encounter snakes on our hikes — water and land snakes. Sometimes, we’re not sure if they’re venomous, and we ALWAYS leave them alone. Well… Except for the hurt Cottonmouth in the road we saved. And those snakes we knew to be non-venomous, like the very large Brown Water Snake that somehow ended up in my interior closet (how he got there, I’ll never know…?). Even the kitties were frightened of that poor scared — and massive guy.

Most snakes aren’t aggressive and will flee when humans approach, so they’ll only defend themselves — striking out or biting — if they’re feeling cornered, threatened, or are handled. An inordinate amount of snakebites are on the hands and arms, due to handling snakes. Be smart, and above all else — be respectful of wildlife and their land. 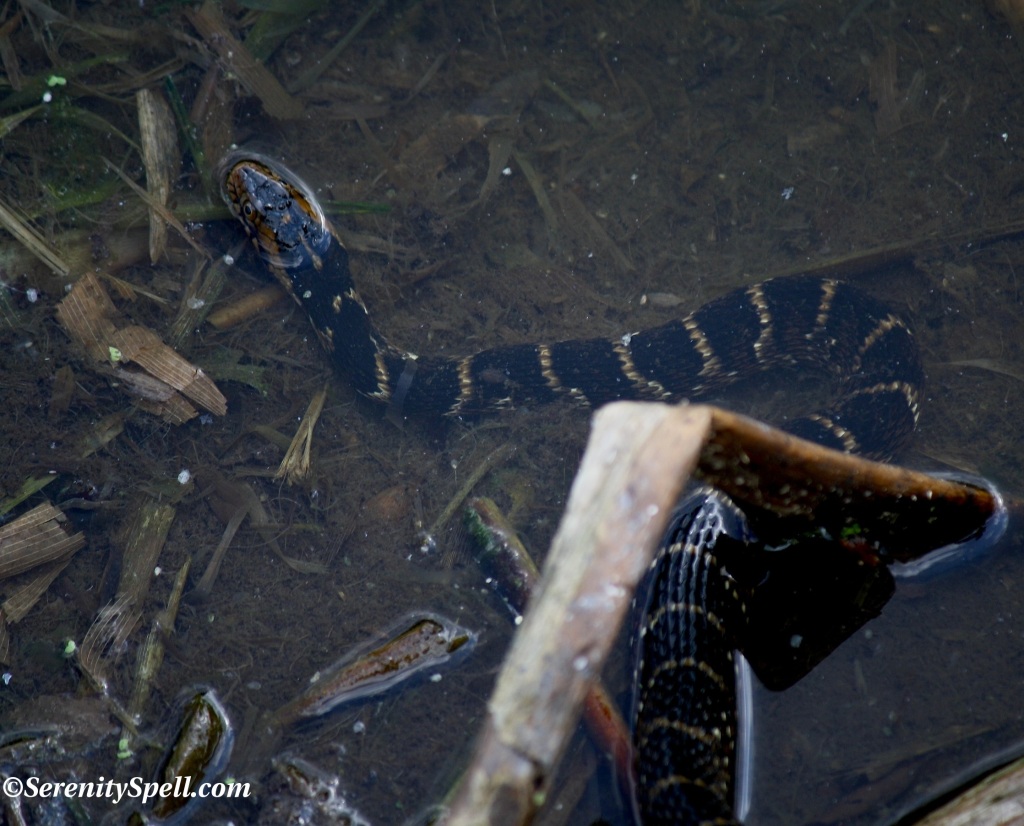 Visit the blog Hinterland Village Resort, for a post on A Snake Rescued in India!

Unlike land snakes, which lay eggs, the Florida Banded Water Snake bears live young! Mating occurs during the mid-winter and spring, and litters of 20 – 30 young are born in the late spring through summer. Baby Banded Snakes are 7 – 10 inches at birth.

Season of the (Red) Snake

It’s apparently the season of the red snake. We just encountered our first Corn Snake / Red Rat Snake (oddly enough, for its commonality) — and most recently, on a brief excursion to photograph butterflies in the northern section of the Everglades, I nearly stepped on this lovely young Orange Rat Snake at dusk. He was none too happy with our presence, and my undivided attention to his colorful mug.

Also known as the Everglades Rat Snake or Glades Rat Snake, this species is known for its calm nature (in captivity) and wide array of bright colors, making it another favorite with snake keepers. While many areas are host to the Everglades Rat Snake, Florida has a particularly high concentration — the species derives its name from the Everglades region in South Florida, where it’s said to have originated. Although prone to aggression if feeling cornered or threatened (like many animals, unsurprisingly), they are NOT dangerous, and spend much of their time in hiding — in crevices, tucked into knotholes, burrowing into holes, on trees (including palms), or on treetops (they’re great climbers). Like many Florida snakes, they’ll quickly flee to the water should they sense danger on land. They can reach lengths of 4 – 6 feet, although a few have been reported up to 7 feet — making it one of the longest snakes in North America. A single clutch can include between 7 – 27 eggs, hatching in July or September. As the snakes mature, they change from a blotchy grey to orange or sometimes red, with four standard stripes resembling their background color — with striking red eyes and a matching red tongue (the red eye can be seen in this picture). Their natural habitats are grasslands, wetlands, and swamps.

Whenever we see snakes around our home, they’re usually non-venemous; and we ensure that they’re protected from lawnmowers and the like. Snakes keep rodent populations down — and if you live anywhere near water, you realize how large water rats can become. Snakes are our friends! If you or someone you know is afraid of them, gently relocate the snake and / or its nest. We once had a large Brown Snake manage its way into our inside closet (how, we’ll never know). Believe me, I’d — and by “I,” I mean the male — would rather have relocated that Brown Snake than a water rat.

Initially we thought it was a young Cottonmouth…. Being near the water, and with the surrounding wetlands and fields. We’ve seen a few of them and their skins on our hikes through the Florida flatwoods and swamps — which is why I always wear my boots when we’re out and about! It’s their land, after all. I’m thankful to visit, each and every time.

But we realized it was far too bright, even for an infant Cottonmouth — besides, this was an adult (this realization reached after the human male jumped excitedly over the embankment to get a closer look). I researched it later, as I had honestly never seen one, in all my years here. It’s a Corn snake — otherwise known as a Red Rat snake, apparently quite common. The term “Corn snake” — dating as far back as the mid- to late 17th century — arose when southern farmers stockpiled their harvested ears of corn, attracting rodents. The rodents in turn attracted these snakes.

Corn snakes are found throughout the Southeastern and Central US, and are known to be extremely docile — not biting easily, and not aggressive — making them “ideal” pet snakes (boo). Averaging 3.9 – 6 feet, they’re considered a moderate-sized snake, and prefer habitats such as overgrown fields, trees, palmetto flatwoods, and abandoned buildings and farmlands. They host a wide variety of color and pattern variations, as well. I’m still in disbelief that I haven’t seen one of these lovelies on any of our hikes — they’re pretty hard to miss.