Here’s some simple advice: Always be yourself. Never take yourself too seriously. And beware of advice from experts, pigs and members of Parliament. -Kermit the Frog

I missed National Frog Month (APRIL, by the by), but no worries. It doesn’t diminish my excitement (squeal!) when I see these lovelies, and I still spend a ridiculous amount of time snapping them. Like this little guy, who was posing next to his bronzed brethren in a pond fountain….

Such a look. I giggle every time I look at him….

What beautiful eyes you have, my lovely

Frogs are amphibians, which comes from the Greek meaning “both lives.” Below are a few fun facts on these fascinating creatures, those that live in water and on land.

Frogs continue to be seen as an indicator species, providing scientists with valuable insight into how an ecosystem is functioning. Because they are both predators and prey, many animals are affected by them — giving further insight into the health of the ecosystem. There are over 6,000 species of frogs worldwide. Scientists continue to search for new ones…. Unfortunately, about 120 amphibian species, including frogs, toads and salamanders, have disappeared since 1980. Historically, one species of amphibian would disappear every 250 years. A powerful case for conserving and nurturing their (and our) environments. Our adorable little Southern green tree frogs took up residence in unused and abandoned birdhouses, and I happily accommodated them by adding more (and of course, never using pesticides) — anything to help their dwindling populations.

In the flesh and in bronze: both so lovely

We don’t want frogs to disappear! No! Courtesy of Vancouver Aquarium

Pig Frogs (Rana grylio) — sometimes known as Lagoon Frogs or Southern Bullfrogs — are aquatic frogs that live in the Southeastern United States. Smooth-skinned and agile jumpers, they’re almost entirely aquatic, preferring lakes, wetlands, cypress swamps, and marshes that are heavy with vegetation. These innocuous little fellas are always heard, but not always seen. When I finally spied two of them — straining at odd angles into the wetland waters to nab shots, not always the safest endeavor — I was a happy camper.

A Pig Frog in the Florida Wetlands

What’s so interesting about this frog is its sound. The pig-like grunt is used by the males to attract females, and it sounds very similar to a grunting alligator (although not quite as deep) — and unbelievably, it’s just as loud, echoing through the waters. So when we’re walking in the Everglades, or in other areas thick with swamp or wetlands…and we hear a loud *GRUNT* with no visible noise-maker…we always pause. Even for those accustomed to alligators, this little frog’s resounding trickster guttural calls and lack of sight/access are daunting. Click here for their sound.

Another Pig Frog in the Florida Wetlands

Sorry Pig frog, but Kermit you are not:

Many cultures prize frog legs as an epicurean treat (ick). While most frog species are edible, it’s the larger ones — such as bullfrogs and pig frogs — that are large enough to be profitable. They’ve long been staples of the frog-leg industry in Florida, and are hunted at night from boats using lights and miniature pitchforks known as “frog gigs.” Not anyone can take up frog gigging or selling these frogs, however — a commercial freshwater fish dealer’s license is required.

A Luminescent Florida Leopard Frog (And a Few Fairy Frogs)

Hand in hand, with fairy grace, Will we sing, and bless this place. —William Shakespeare, A Midsummer Night’s Dream

As we hiked the Apoxee Trail in the Grassy Waters Preserve, it was often flooded — pictures forthcoming, because wading through 4-6 inches of swamp / marsh waters in the Florida Everglades is always an adventure! My most worried comment, 2 hours into the trail: “Errr, it appears as though these waters are now even with the swamp.”

But everywhere I looked, itsy-bitsy cricket frogs were jumping about the trail, and these lovelies were hiding in the vegetation and waters. He’s a Southern Leopard Frog (Rana sphenocephala), common to the marshes, swamps, and cypress swamps of our area. The frogs range from dark brown to bright green. Apparently, the existence of a subspecies — the Florida Leopard Frog (Rana utricularia sphenocephala) — is debated among the experts.

Their colors are pure brilliance, with luminescent greens flashing here and there. There were so many frogs I wanted to photograph, but it was tricky nabbing them as they leapt into the waters or darted into the undergrowth. Just magical. So naturally I had to include one of my favorite children’s illustrators — Ida Rentoul Outhwaite — and her more famous images of frogs and fairies.

Nature’s colors, intensity, and variations continue to amaze — may your weekend be equally as spectacular and magical as this brilliant but diminutive frog! 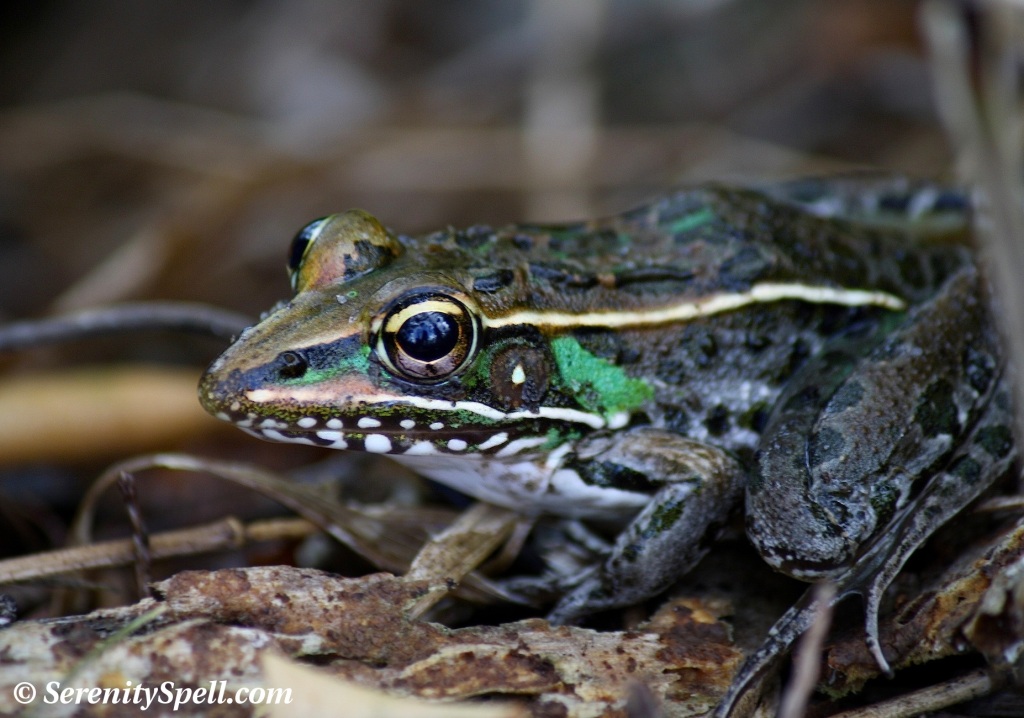 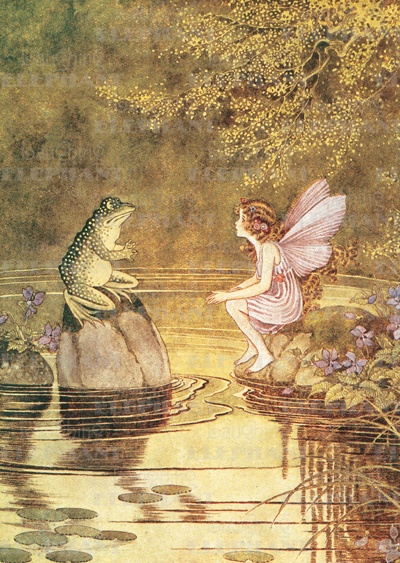 Ida Rentoul Outhwaite, “They stood full in front of her….”

I was so focused on a songbird on this tree’s branch, that I barely heard my guy gasping, in a barely audible whisper…. “Ohmahgawd. You’re gonna freak.” I love frogs — well, I seem to say that about everything — but I do love them and appreciate their vital role in our ecosystems.

I couldn’t even see what he was pointing at — did I need my spectacles? I had my telephoto lens working hard, so as to not disturb the bird. I quietly crept up to the trunk, and there it was: a tiny frog — he had to be two inches, at the most — nestled comfortably in the depths of a knot within the tree’s trunk. My eyes quickly became bigger than the knot itself.

I’m continually amazed at how much life trees support — seen and unseen.

Instructions for living a life.
Pay attention.
Be astonished.
Tell about it.
—Mary Oliver 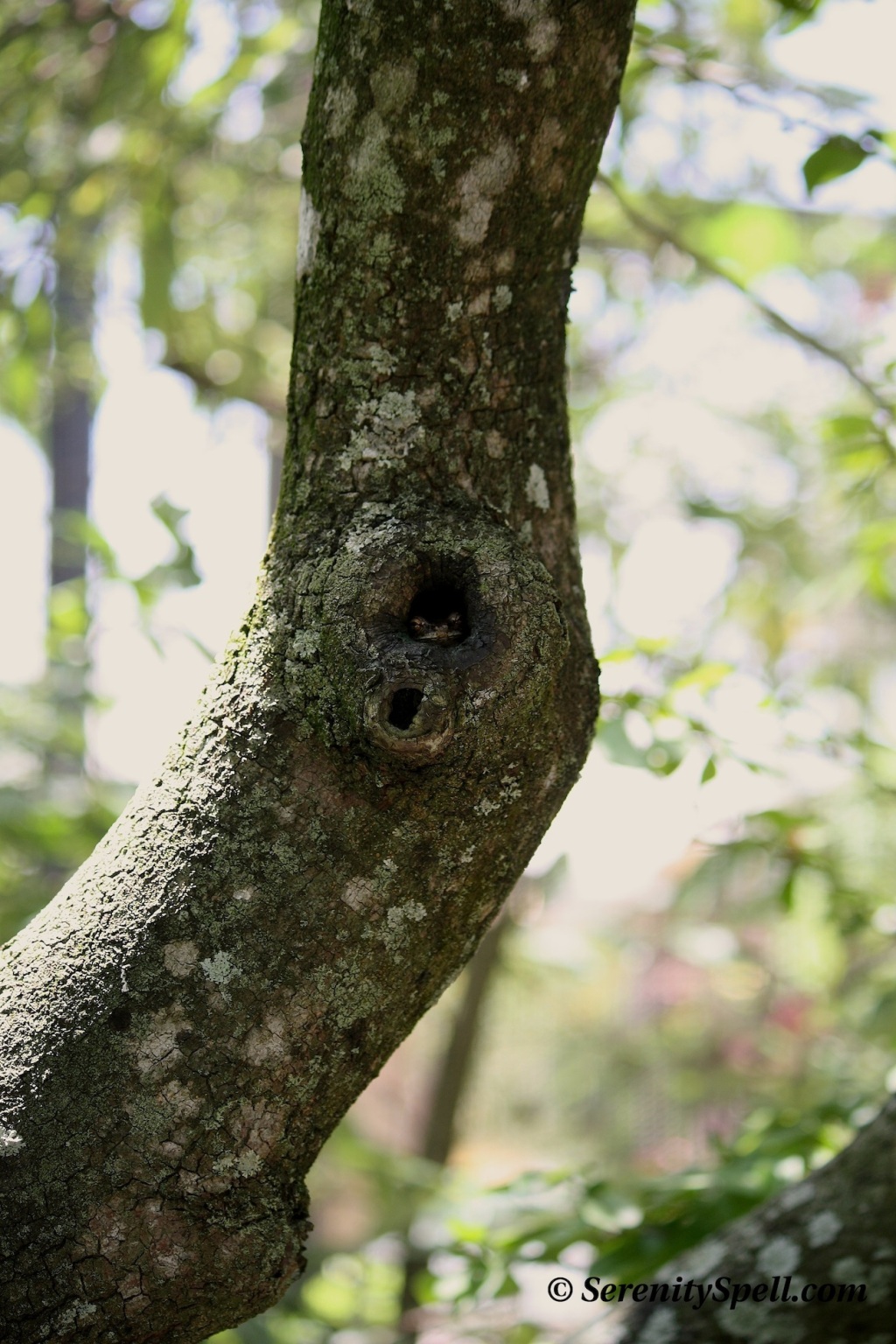 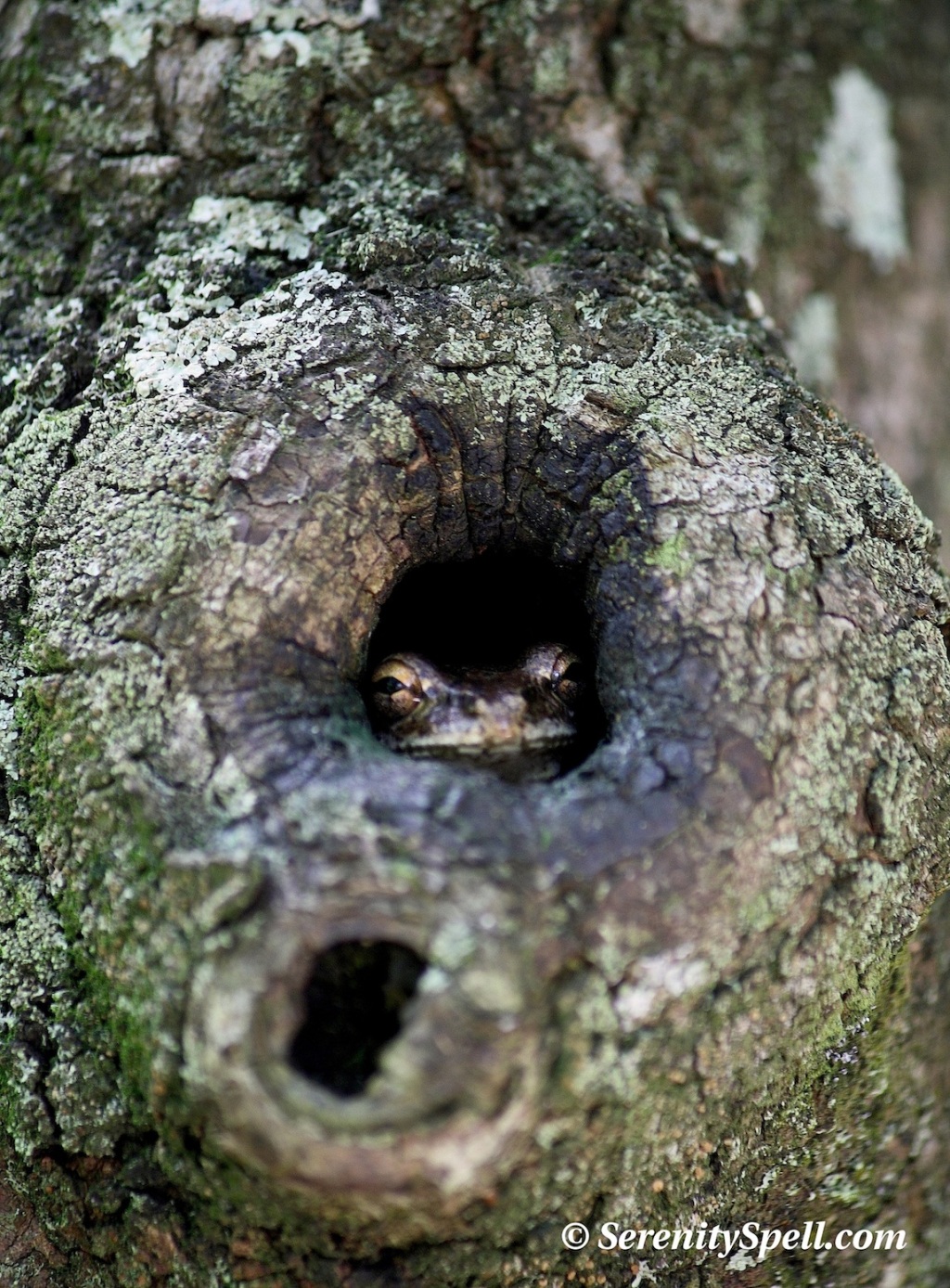 During our recent trip to Jonathan Dickinson, our exploration centered on the Florida Trail and the Kitching Creek portions, which can lead you to  Riverbend Park and Indiantown Road, to the south.  It was a perfect day for such an investigation — overcast and lonely (encountering only one other backpacker, on his way to the primitive campsite). Four hours of hiking in Jonathan Dickinson’s terrain, and one is thankful for cloudy days (or at least my Irish skin always is). After passing stately rows of centuries-old cypress and live oak along the Loxahatchee River (into which the Kitching Creek flows), we headed into some lovely cypress swamps — always my favorite — before breaking out once again into the open pine flatwoods. Outside of the family of feral pigs (wild hogs) and myriad birds (we tried looking for the maniacal owl), it was somewhat quiet. But towards the end of the hike, I nearly stepped on a tiny, beautiful barking tree frog. Fortunately, s/he leapt straight in the air to avoid my lumbering hiking boots. I was reaching exhaustion after those hours of hiking — I really, really need to return to hiking shape….

A tiny barking tree frog hopped out of the way of my lumbering hiking boot, clutching a twig for dear life….

Beautiful markings on a tiny barking tree frog — safe and sound after s/he hopped out of the path!