For more information and images on Anhingas & Cormorants, visit the Categories section below, in Florida Animals — or in such posts as On the Wings, A Calm Cormorant,  Nesting Season, and more. 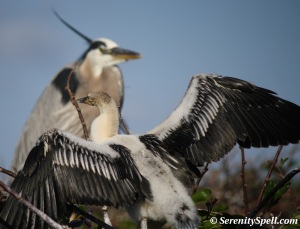 Big Like You: Anhinga and Great Blue Heron Babies

At our protected Green Cay and Wakodahatchee Wetlands — oases of green in South Florida’s suburbia, nestled on the edge of the Everglades — nesting and baby season is an exciting time. In the Seminole Indian language, Wakodahatchee translates as “created waters” — and that’s exactly what’s been done at these wetlands. Wakodahatchee’s present-day 50 acres of wetlands were, in their previous incarnation, unused utility land. But the space has been transformed into an Everglades wildlife ecosystem, with marsh habitat, intermittent tree islands, and cypress hammocks. Each day, the Palm Beach County’s Southern Region Water Reclamation Facility pumps nearly two million gallons of highly treated water daily into Wakodahatchee; the wetlands themselves further naturally cleanse, recharge, and filter the remaining nutrients and maintain earth’s water cycle. Dozens of different species of trees, shrubs, and aquatic vegetation were also incorporated to help manage this feat.

Some of the year-round residents don’t seem overly concerned with the consequent increase in human traffic. With more than 140 species of birds identified at Wakodahatchee, and the fact that it’s part of the Great Florida Birding Trail, the site is a birdwatcher’s and photographer’s paradise — especially during the spring. I like to stroll towards the back of the boardwalk to admire some of the shyer inhabitants — and consequently avoid the chaos of the human visitors during this time of the year, when the wetlands’ newest residents are on display. .

A noticeably calm cormorant — or “shag” (referring to the bird’s crest, which is lacking in the British forms of the Great Cormorant) — was preparing for a nap at the end of the boardwalk. These medium-to-large coastal (rather than oceanic) seabirds are plentiful in southeastern Florida, and can often be seen diving for fish or water snakes. After fishing, the cormorants dry their wings ashore in the sun or in the trees (similar to the cormorant-like anhingas), as their feathers don’t possess the waterproofing oil of other seabirds.

Humans have long used trained cormorants to fish the waters of China, Japan, and Macedonia. Trained by fishermen, a snare is tied near the base of the bird’s throat, allowing the bird to swallow only small fish. When the bird captures and tries to swallow larger fish, the snare doesn’t allow the fish to be swallowed, and it becomes stuck in the bird’s throat. The cormorant is forced to return to the fisherman’s boat, where he helps the bird regurgitate the fish, removing it from its throat. Traditional cormorant fishing isn’t as common a method today — with the development of more efficient fishing methods — but it remains a tourist draw. However, the method is still practiced in some Japanese regions, and has continued uninterrupted for 1300 years in Gifu City, in Gifu Prefecture.

Although both cormorants and anhingas are quite common in our area, I was struck by the serenity of this guy, and his beautiful teal eyes…. Their distinctive turquoise eyes fade quickly after the breeding / nesting season. 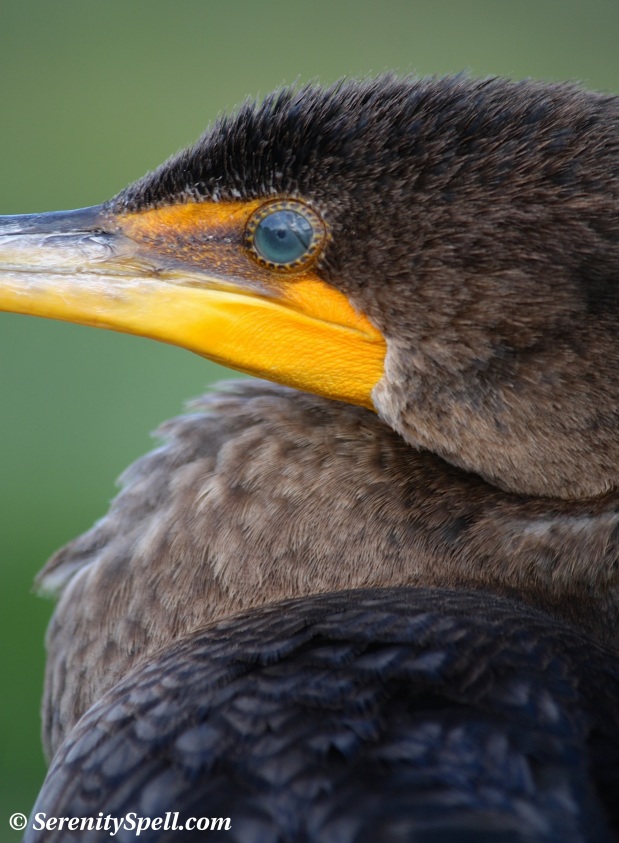 Dozing Cormorant in the Florida Wetlands