There’s been much talk of the upcoming oil drilling in the Arctic. Drilling creates an even stronger greenhouse effect; risks disaster to this pristine land; and disrupts whale movements with its added noise. Greenpeace’s petition has been widely distributed (see the last paragraph of the post for the link), but I thought Mr. Drost’s words summed it up beautifully. PROTECT and PRESERVE what little remains…. Enough is enough is enough.

This summer the Dutch/British owned oil company Shell will start drilling for oil in the Arctic. They can do this because the sea ice has melted enough to expose the oil rich sea floors of the high north. This oil will be burned, resulting in more carbon dioxide in the atmosphere and an even stronger greenhouse effect… Besides, we’ve seen in the Gulf of Mexico what can happen when something goes wrong while drilling for oil. And with the cold temperatures oil degradation takes much longer as in the warmer Gulf of Mexico.

Since I came to the high Arctic for the first time in 1999 I’ve seen islands emerge from glaciers, I’ve reached places that used to be locked in ice every summer and I’ve seen Polar Bears change their behavior because of the changing ice conditions. When I made my first visit I expected to visit a true…

From the Cornell Lab of Ornithology, check out this amazing time-lapse video of a male Great Blue Heron, as he diligently protects 5 eggs during an April 27 snowstorm. All 5 hatched — despite the snow, and despite constant owl attacks. What a good daddy!!

The Cornell Lab features some fascinating live feeds of various birds, and now the Great Blues are nesting…. But numerous species are featured on their live cams.

Visit the Cornell Lab of Ornithology for more information.

There have been many wonderful comments from people explaining how they’re creating natural habitats for their wildlife critters in their personal spaces (usually birds, but not always) — some of whose populations have suffered a decline in recent years. It’s crucial in our modern culture/society to do so; It doesn’t take much to provide a wee bit of food, water, and shelter for these guys…. Besides, it calms the soul to view nature. ♥

Here, Nature Mom teaches her son how to create a backyard wildlife habitat, something anyone can do, in any environment — I had a great little set-up in a former apartment. Following guidelines provided by the National Wildlife Federation (NWF), she details the creation and necessary resources for her local wildlife…. Today my son and I began working towards making our backyard into a Certified Wildlife Habitat, per the guidelines provided by the National Wildlife Federation (NWF). I figured it would be best for my four-year-old if we only focus on one aspect of certification at at a time. Our focus today? Step one: Provide Food for Wildlife.

This was a fun, educational activity to work through with my son. What in our yard is food for wildlife? What could we add that wildlife could eat? What animals might eat each of the items on this list?

We decided our yard provides nuts (acorns from the oak tree), nectar (the rosemary flowers), and seed (supplemental bird feeders). We…

We often encounter gopher tortoises on our hikes in Florida’s natural spaces; not just in the far reaches — and there have been times when they’ve needed some help with humans’ encroachment into their land. This poor guy was trapped behind acres of personal enclosure, and had been trying to burrow in the mulch; there were dozens of failed holes to attest to his failed attempts. We stayed awhile, to see if he could manage an escape on his own (or if he was simply choosing that location), but then saw how the fence was buried, impeding his escape. Between the buried fencing, his constant dodging at the barrier, and the myriad failed burrows, it was easy to understand his dilemma. We quickly relocated him to a perfect burrow-able location nearby — literally five feet from his manic failed and impossible attempts behind the fencing, where his natural habitat awaited him. NOTE: With turtles and tortoises (of the water and land varieties), help them safely in the direction they’re heading. It would have been nice for the actual property owners to have accomplished this tiny feat, of course — it wasn’t difficult to witness the poor guy’s quandary (or his efforts); these aren’t small tortoises.

One of the oldest living species, the burrowing tortoise is found throughout Florida and southern Georgia, South Carolina, Mississippi, Alabama, and eastern Louisiana. They dig and live in long burrows in pine savannas, thus protected from summer heat, winter cold, fire, and predators. Gopher tortoises are essential to the local ecology — their burrows also provide homes for other animals, including indigo snakes, gopher frogs, mice, foxes, skunks, opossums, rabbits, quail, armadillos, burrowing owls, snakes, lizards, frogs, toads, and other invertebrates. Their burrows — abandoned or shared — may be the homes to more than 300 species of animals at one time or another. Pretty amazing; and it’s easy to see how destroying the habitat of the gopher tortoise greatly alters the already fragile ecosystem.

Federally protected as a threatened species (FINALLY in Florida, where the status was “under review” for years), the tortoise’s main threat remains: Habitat loss and destruction. For instance, it wasn’t until 2007 in Florida, that developers were forced *by law* to relocate burrowing tortoises — until then, development could shockingly occur with no thought to the safety of the animals and the destruction of their habitat. It was only then that the Gopher Tortoise Management Plan was implemented.

Like a baseball player stretching muscles and practicing skills during spring training, the gopher tortoise is emerging from winter dormancy and moving slowly and steadily through the landscape in search of greenery to eat and a new place to dig its burrow.

Look for gopher tortoises’ distinctive domed brown shells and stumpy legs, as these land-dwellers make their way through Florida’s open canopy forests and sandy areas. The Florida Fish and Wildlife Conservation Commission asks people to remember that gopher tortoises are good neighbors, and can live from 40 to 60 years, so leave them and their burrows alone.

“The Florida Fish and Wildlife Conservation Commission works with, and is grateful to, the homeowners, landowners, businesses and public agencies willing to share their lands with gopher tortoises and their burrows,” said Deborah Burr, the FWC’s gopher tortoise plan coordinator…

For the rest of this blog post and more on the Gopher Tortoise Management Plan, visit Florida Restores 36,000 Acres For Tortoise Habitat.

One of the oldest botanical gardens in South Florida, Flamingo Gardens today is a not-for-profit facility with more than 3000 tropical and sub-tropical species of plants and trees. The lush Wray Botanical Collection features 21 of the largest trees of their species in Florida (and in many cases, the United States) — “Champion Trees” — as well as a unique hammock of 200-year-old live oak trees, and several specialized gardens. Within Flamingo Gardens’ 60 acres also resides an Everglades Wildlife Sanctuary, aviary,  and Bird of Prey Center, which are home to the largest collection of Florida native wildlife in the state — offering permanently injured and non-releasable animals special care and a home. (Be sure to read their stories!)

Free-roaming peacocks and iguanas also stroll the grounds (as do TNR’d kitties — yay!), although we missed the iguanas on our initial visit. But to see the peacocks in all their glory, roosting in the centuries-old live oaks… Beyond lovely. The colors of the birds, joined with the ornate oaks and tropical foliage, was ethereal.  A fairy world. Another thanks to the Wrays, and to all those who continue to protect and preserve the land and creatures of the Everglades….

For more on Flamingo Gardens and its mission to “depict and preserve the natural and cultural heritage of South Florida and the Everglades,” visit their website! 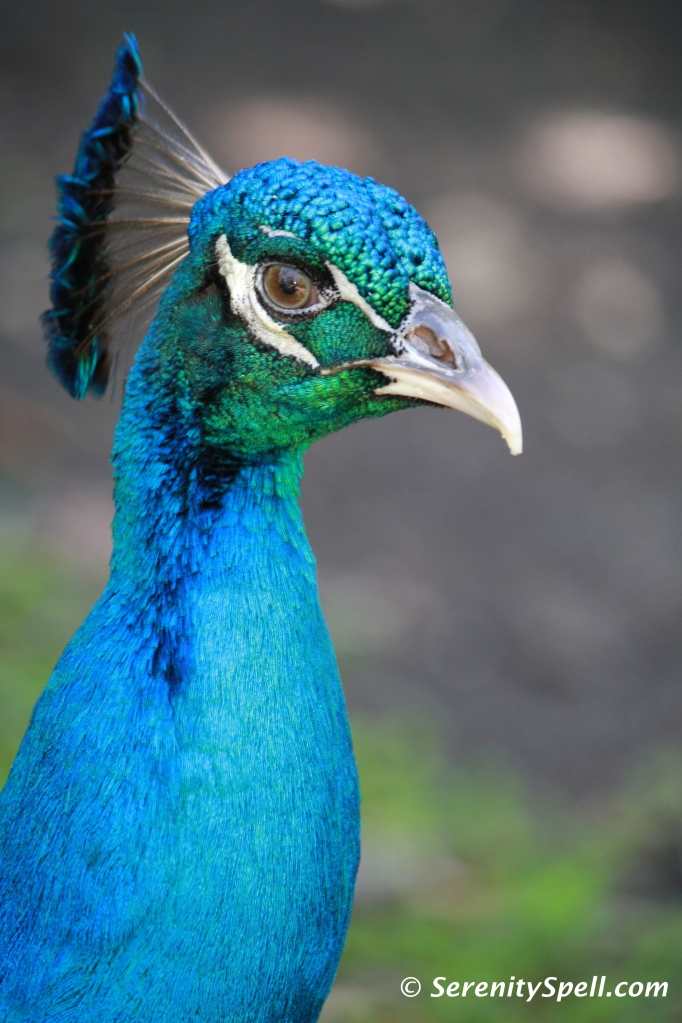 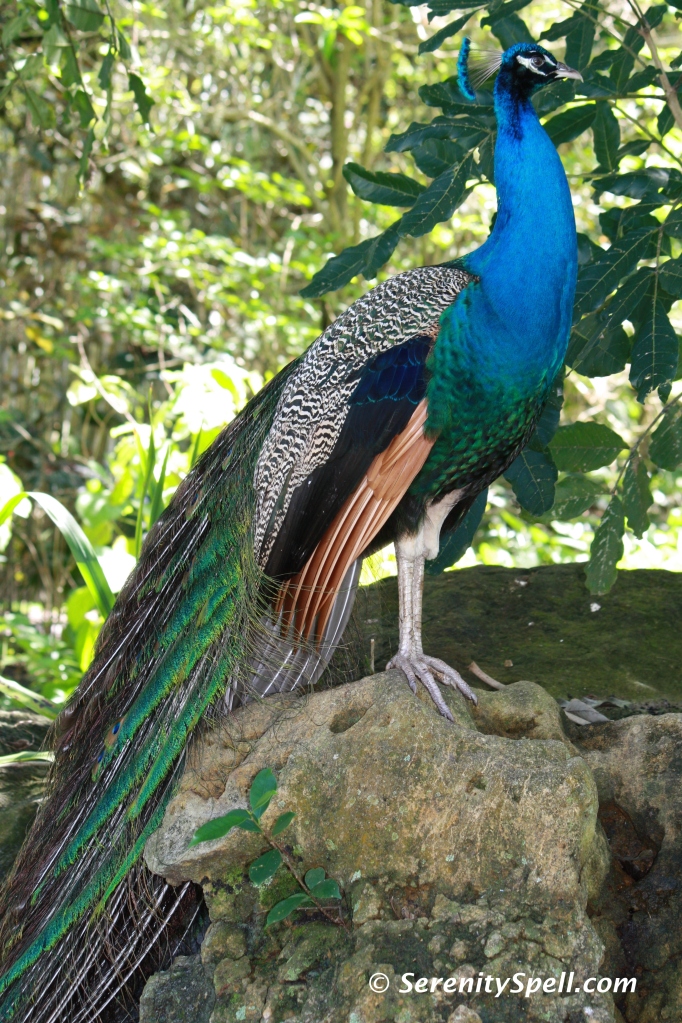