Sing a Song of Sixpence

Sing a song of sixpence,
pocket full of rye,
four and twenty blackbirds
baked in a pie.
When the pie was opened,
the birds began to sing:
isn’t that a dainty dish
to set before the King?

The King is in his counting-house
counting out his money;
the Queen is in the parlor
eating bread and honey;
the Maid is in the garden
hanging up the clothes,
when down swoops a Blackbird
and snaps off her nose!

There are many interpretations to this curious nursery rhyme, dating to the 18th century. It’s been traced to the 16th-century practice of placing live songbirds in a pie (who wouldn’t want live animals flying out of their prepared food?), to various historical events and folklorish symbols, and even to a coded message used to recruit crew members for pirate ships. Lord Byron, James Joyce, Virgina Woolf, Agatha Christie, George Orwell, and Roald Dahl all referenced the ditty, and it’s appeared in songs by The Beatles, The Monkees, Radiohead, Tom Waits, and others. Obviously this mysterious little rhyme continues to captivate our popular consciousness.

As we approach the equinox, I’m anxious to spy our returning colonies of Red-winged blackbirds — the males, glossy black with their brilliant scarlet-and-yellow shoulder patches, puffing up or hiding (depending on their level of confidence), and belting out their conk-la-ree songs. And the more subdued females, with their brown colorations and clever camouflaging — so much shyer than their male counterparts.

Ever regal: Male Red-winged blackbird in the Florida wetlands

Watching over his brood… But I see YOU! 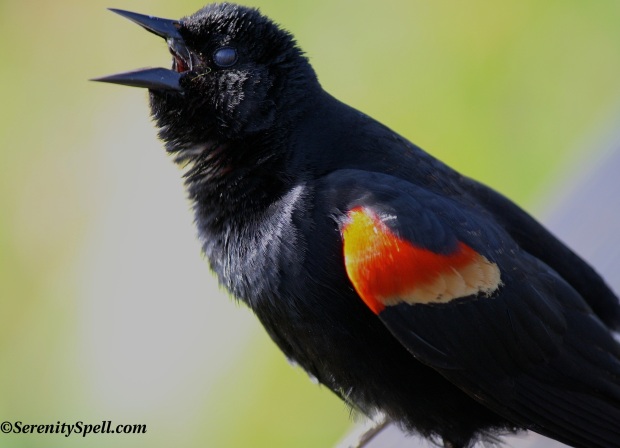 Puffin’ and hollerin’ away

Always the shy ones: Female Red-winged blackbird in the Florida wetlands

Flittering among the reeds

Lovely girl against the shallow waters