[Many thanks to fellow bloggers for alerting me to a glitch here, which broke readers’ feeds; If you’re interested in viewing a few posts that didn’t make it to your Reader, visit Recent Posts below, from “The Show” forward, or simply click Unfollow & Follow, and they’ll appear. Or scroll! Thanks to WP for the fix.]

Purple Gallinules are one of the shyer creatures of our wetlands, and to spy one is always fun. It’s ironic that they’re so timid, given their bold coloring. But it’s always a joy to watch these purple, blue, and green gems — especially since they’re my favorite colors, wrapped up into one bright little bird.

I am spectacular, yes

Perhaps you need to see me at a different angle, to fully comprehend my beauty

These lovely creatures live in the freshwater marshes of the southeastern United States, as well as in Central America and the Caribbean. There’s no mistaking this medium-sized rail, with its purple-blue plumage, green back, pale blue forehead, white undertail (of which I’ve caught more than one glimpse), bright red and yellow bill, and long yellow legs. The juveniles sport blander, brown colorations. The  gallinules’ long legs make them *seemingly* awkward fliers, so short bursts of activity are their mode of transportation — or swimming like a duck if they’re not navigating the marsh with those dangling legs. They nest in well-hidden floating constructs in the wetlands, laying 5-10 eggs. 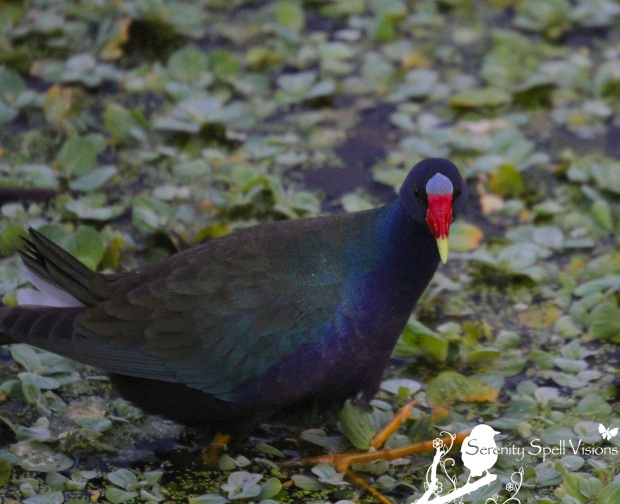 Dinner-time in the duckweed at dusk

Heinie-feather shot in the duckweed

The Purple Gallinule is omnivorous, eating the seeds, leaves, fruits, and grains of both aquatic and terrestrial plants; they also enjoy insects, frogs, snails, spiders, earthworms, fish, and even the eggs and young of other birds. When I see them in our wetlands, they’re often alone, nestled in the vegetation and cackling away — or being chased by other birds, most often by their sister species the Common Moorhen.

Munching on blossoms in the wetlands

Despite the appearance of an awkward flier, Purple Gallinules have flown far from their home tropical marshes. They’ve turned up in the northern U.S., Canada, and even Europe and South Africa!