It’s hard not to be captivated by this bird; they’re the epitome of ethereal beauty, grace and strength, stalking and flying through our swamps and wetlands.

Great Egrets, also known as the Great White Egret, the American Egret, the Large Egret or Common Egret, are a common sight in our wild spaces — even our neighborhoods. They’re the largest egret in the Old World — thus the GREAT of their title. In the New World however, Great Blue Herons win the size competition. Great Egrets are large egrets boasting brilliant all-white plumage, and are found across much of the world, from southern Canada to Argentina, and in Europe, Africa, Asia, and Australia. Standing approximately 3 feet tall, great egrets have graceful necks, long black legs, and black feet. Their bills are straight, pointed, and yellow.

These egrets feed by stalking, wading in the shallow water, patiently waiting for fish — then grabbing or stabbing their hapless meal with sharp bills. I’ve also seen them dine on amphibians, reptiles, and small mammals. 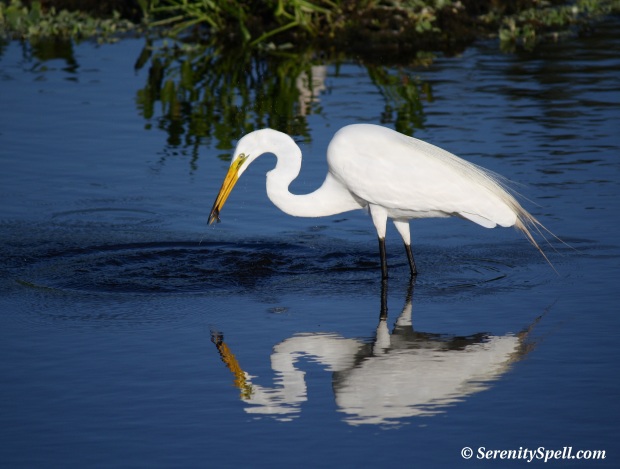 Great Egret Stalking and Catching Fish… Got It!

They fly with their necks pulled back in an S-curve, like so: 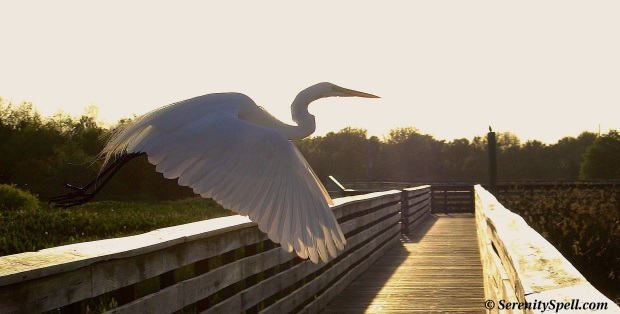 Great Egret in Flight at the Protected Wetlands, Dusk

The Great Egrets in our wetlands nest in colonies with other egrets and herons. The nest is constructed of sticks and covered with vegetation, and located in trees or shrubs — or on tree-island rookeries. Not all egret hatchlings survive the nestling period — aggression is common, with the larger chicks often killing the smaller or weaker siblings. The oldest known wild Great Egret lived nearly 23 years.

The feathers of the Great Egret are stunning, almost unreal; sadly, these beautiful birds were hunted mercilessly — nearly to the point of extinction, their numbers decimated by 95 percent — towards the end of the 19th century. Their breeding plumage was especially prized, and their treasured feathers were used in hats across the globe. With conservation measures enacted, their numbers grew throughout the 20th century. While wetland habitat loss is once again threatening their existence, these birds have a high adaptability to human habitation. Of course, the loss of wetland ecosystems remains another issue altogether….

Great Egret Coming in for a Landing

In 1953 the Great Egret was chosen as the symbol of the National Audubon Society, the environmental organization formed to protect birds.

During the breeding season, the Great Egret displays long, elegant plumes on its back, which are used in courtship displays. Like a peacock, the feathery plumes spread out like a fan. (Outside the breeding season, these long feathers disappear.) During this time, the lore (the area between the bill and the eyes) may turn vibrant green. Nature’s colors are brilliant, and this picture deserves its own (upcoming) post….

Great Egret Takes a Break While Stalking His Meal