I was lucky to have witnessed a mating pair of alligators during a recent trip to our protected wetlands — while I believe the actual mating had already occurred (as evidenced by the babies on the nearby bank), their  affinity for each other was obvious; Alligator Love: A Courtship offers opportune images of alligators’ elaborate courtship. Nearby were their offspring (8-9 counted) — as captured in Alligator Babies.

This little guy has grown quickly in the last 2-3 weeks; I didn’t spy any other siblings, but hopefully some have managed to survive the rigors of the swamp. After laying 20-50 eggs, the mother alligator closely guards her hatchlings — at 6-8 inches long, they’re near-replicas of the parents, save for a series of yellow and black stripes which camouflage beautifully with the surrounding marsh roots (the rings aren’t as pronounced in this more recent picture). They remain with her for five months before finding their own ways. We typically see 5-10 hatchlings survive in our protected wetlands — and even less make it to this age, as shown below. Common predators that prey upon the juvenile alligators include snapping turtles, snakes, raccoons, bobcats, raptors, and even larger male alligators.

Look at that face; I hope the little guy makes it…. 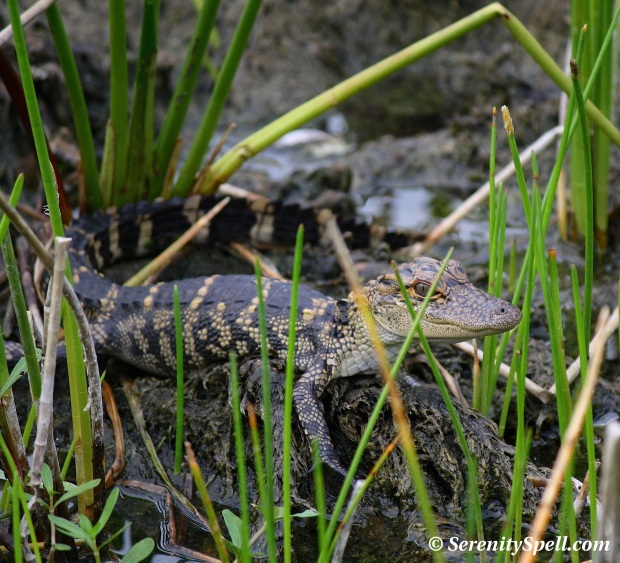 Young Alligator in the Florida Wetlands